HALLOWEEN MY FAVORITE TIME OF YEAR 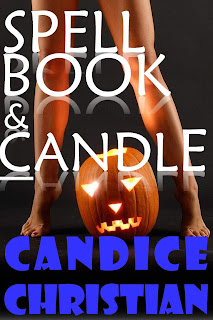 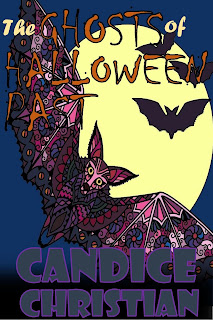 CLICK HERE TO PURCHASE - THE GHOSTS OF HALLOWEEN PAST
A woman, Grace Goode, reflects on her past Halloweens and how they still haunt her today.

Thirty something woman, Grace Goode, reflects on her past Halloweens as she stands on the balcony of her Salem home. The memories, some full of interesting things that happened to her on the Most Hallowed Eve.

She has memories of lust, passion and horror. For her, most of the year, the lust and passion have pushed the horror from her mind, except on Halloween. Then the freaky, weird and terrifying memories emerge, and push the fond memories aside.

Her friends, Linda and Cindy figure heavily in her memories and thinking of them most of the time brings a smile to her face, and a twinge arousal between her loins. That is why Halloween is such a bittersweet time for Grace. It’s the terror that surrounded her friends that haunts her.

CLICK HERE TO PURCHASE - SPELL, BOOK AND CANDLE
Jinx is an eight hundred year old witch, living in the 17th century. The Coven Council has requested she prevent Kaitlyn from committing suicide and Sarah being murdered by her family. All on All Hallows Eve.

The 17th century was a time just before the enlightenment, where superstition, and fear of dark magic and fear of witchcraft ran rampant. A time that seemed just right for the witch or succubus Jinx Blankley and her powers. The dread of dark magic usually reached its peak on All Hallows Eve.

Her unorthodox lifestyle, has brought attention to her by the Coven High Council, and the entity, Ulrich, that controls the time and space in which Jinx is living. He has been sent to recruit her for a near impossible task. Ulrich is aware Jinx never turns down a challenge even if it means going head to head with Tiordan the executioner.

Jinx is recruited to rescue Kaitlyn and Sarah, both lesbians, from the dangers that envelope them. Kaitlyn being pressured into suicide by the Corpusytes and Sarah being killed by her parents, at the behest of the Corpusytes.

Jinx, spends a lot of time inside the dreams of the two girls, and through the power of suggestion enables the girls to experience lesbian sexuality, without any fear of reprisal. 17th century sensibilities would never accept two females having sex together.

Jinx has her work cut out, first with Kaitlyn's mother Elspeth, the source of the pressure on Kaitlyn, by way of Tiordan. Jinx believes she needs to really stick it to Elspeth, to make her point and make her ease up on the pressure on the girl.

Sarah's plight is much different, as she lives within a psychopathic family, where every member of the family would slice the other's throat for a new pair of shoes. Extraditing Sarah could be more of a problem.

The question soon becomes, will Jinx repel the forces of Tiordan and make him retreat with his virtual tale between his legs, and provide a safe haven for Kaitlyn and Sarah.

Please feel free to email me at: candicechristian2001@gmail.com
I really appreciate you reading my book! Please, if you have time, review my book. Here are my social media coordinates:
Join me on Facebook Group:
https://www.facebook.com/pg/Fans-of-Candice-Christian-2167845756865295/about/?ref=page_interna
Favorite my author page:
https://www.smashwords.com/books/view/914732
Subscribe to my blogs:
https://eroticlesbianromance.blog/
https://candicechri.blogspot.com/
Visit my website for free stuff and news about releases:
https://candicechristian20.wixsite.com/website
Posted by candice christian at 5:58 AM